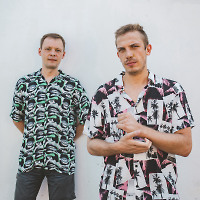 DONT BLINK burst onto the scene in Autumn 2018 with their debut EP on Nervous Records, seeing “COME ON UP” and “INSANE” garnering coveted top spots on the Housewerk playlist and quickly eclipsing 1 Million Spotify streams. Smartly following up the duo delivered a steady output of releases and doubled down on their studio focus, resulting in a breakthrough year of music in 2020.

"THE CUTTING EDGE OF TECH HOUSE"

“VIBRATION” on Sink Or Swim, became their first #1 Track, topping the Tech House Top 100 on Beatport as well as extended stay in the #2 position in the Overall Top 100. A strong run of consecutive Top 10 releases firmly cemented their place among the Top 10 selling Tech House artists on Beatport alongside heavyweights like Eli Brown, Chris Lake, and Martin Ikin.

With the momentum building, Tomorrowland named DONT BLINK one of their Future 4 artists in April of 2021. The distinction brought a compelling opportunity for the duo to showcase their sound and preview the next chapter of music ahead with their mix and feature. A forthcoming onslaught of brand new tracks will see releases on STEREOHYPE, SOLOTOKO, Night Bass, and Armada Deep, among others. Taken together with their diverse range of support from Tech House stars like James Hype, Idris Elba, and Sam Divine, alongside dance music legends like Afrojack, Diplo, Laidback Luke, and Tiësto, it’s time for DONT BLINK’s touring schedule to take over dancefloors worldwide.