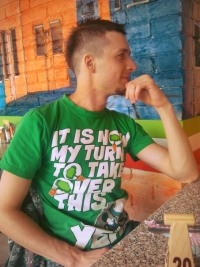 In Sanskrit languages our planet is called 'Mrityu Loka' that means 'the planet of death' - the world of misery. It is also the nickname of musician from Kazakhstan. His name is Andrey Efremov. He was born on 9th of September in 1987 in industrial town Ust-Kamenogorsk, the East of Kazakhstan. Unfortunately this region is full of nuclear tests and different factories. But also this town has a lot of inspiration! Andrey has been interested in music from very childhood. He likes as dance music as heavy metal. He has been interested in playing guitar since he was 18 years old. He was playing in some rock and metal bands, where he also played the role of author of songs. He played in different musician styles. In 2013 Andrey decided to do hid own business. Has Inspired with works of Klaypex , Knife Party, Skrillex and Kill the Noise bands he tried himself as Brostep player . At the beginning of 2014 hi compiled his first remix for The Bear In The Bear band. In spring of the same year he opened his own record studio. In may Andrey has signed the contract with Noz Recordings label. On the 7th of July NOZ RECORDINGS will release his first tracks.